Geographical Location: The Republic of Uzbekistan is situated between the rivers of Amudarya and Syrdarya and occupies 448,9 thousand square km. The span of the territory from the west to the east is 1,425 km and from the north to the south — 930 km. 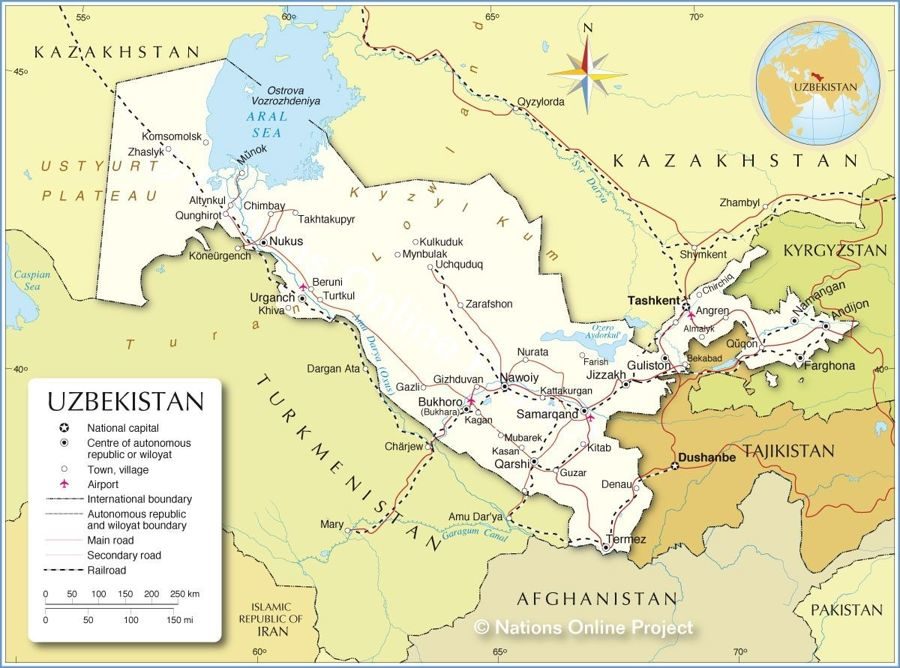 Landscape (relief): Uzbekistan possesses some of the most favorable natural and geographic conditions in Central Asian region. The territory of Uzbekistan is a mixture of plain and mountainous lands. The greatest part of the territory (about four fifth) is covered by plains. One of the main plains is the Turan plain. In the east and northeast are situated the spurs of Tyan-Shan and Pamir with the highest point of the country at 4643 meters above the sea level. To the north and the central part of the territory of Uzbekistan situated is one of the largest deserts in the world — Kyzylkoum.

Subsurface geology and minerals: The bowels of the earth contain stocks of natural gas, lignite and coal, gold, copper, tungsten, bismuth, and oil.

Climate: The climate of Uzbekistan is sharply continental, characterized by high amplitude of day and night, summer and winter temperatures. The temperature varies rather considerably with respect to the seasons. Average temperature in January falls below -6 0 °C, while the average temperature in July may rise above +32 0 °C. Average annual atmospheric precipitation on the plains is 120–200 mm, in mountainous areas — 1000 mm. The amount of precipitations is low, which is why the agriculture relies on irrigation to a great degree.

Soils and flora: Desert vegetation is prevalent on plains, while mountainous areas are covered with steppe, forests and mountain meadows.

Fauna: The country’s fauna is quite diverse: there are rare antelopes saygak and giant lizards that can reach 1.5 meters in length. In the mountains, there are snow leopards and rare species of mountain goats.

Mountain system: Mountains and foothills comprise 1/5 of the territory of the Republic. To the east, prevalent are medium- and high-altitude forms of landscape. Within the boundaries of the Republic, there are flanks of hills and verges of mountain ridges of the Western Tyan-Shan (ridges Ugam, Pskem, Chatkal, Kuramin) and Pamir-Alay (ridges Zeravshan, Turkestan, Hissar, Kougitangtau, Baysuntau). To the south and west, they gradually decline and transform into plains. Rather massive trough lay between the mountains: the troughs of Kashkadarya, Surkhandarya, Zaravshan, and Samarkand. The largest intermountain trough is the Ferghana Valley (370 km in length and 190 km in width). The valley is surrounded by mountain ridges on three sides and is open only in the West. On the border with Afghanistan there is the broad Amudarya trough.

The contemporary level of exploration of minerals is related to opening up of rich deposits of precious, non-ferrous and rare metals, all types of organic fuel — oil, natural and condensed gas, brown and other type of coal, shale oil, uranium, many kinds of construction resources.

A large variety of minerals has been discovered on the territory of the Republic of Uzbekistan with almost 100 kinds of minerals, 60 of which are already employed in the national economy.

Uzbekistan secures leading positions in the world in confirmed stocks of such minerals as gold, uranium, copper, natural gas, tungsten, potassium salts, phosphorite, and kaolin. Hence, for example, the Republic occupies the fourth place in stocks of gold, and the seventh in gold mining, the tenth/eleventh place — in copper stocks, the eighth — in uranium stocks, and eleventh/twelfth place in uranium mining.

Not only do the rich stocks of minerals provide the existing mining complexes with a long perspective, but they also allow for increasing facilities andre-organization of the extraction of the most important minerals such as gold, uranium, copper, lead, silver, lithium, phosphorites, potassium salts,fluor-spar, wollastonite, agrochemical ores, and other.

Leave a request and our manager will contact you for advice.